From blank page to bangle: a day of silversmithing 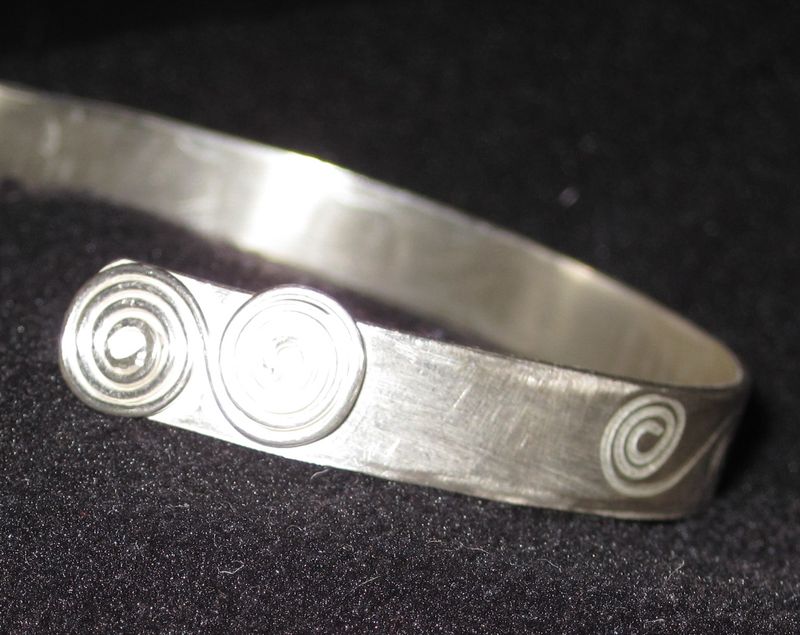 As part of my plan to try out as many jewellery techniques as I could, I

took a Beginner's Silver day at London Jewellery School early this year. During the day we learnt the basics of cutting, annealing, texturing with a hammer and soldering to produce a ring.

While I was very pleased with my end product, I found the day very hard and wondered if these techniques were really for me. But then I had a revelation - I had been walking round, sawing, hammering, etc with a fractured vertebra (I'd previously been told my back was just badly bruised), which may have impacted on my silversmithing experience.

So I signed myself up for the intermediate workshop. This is a major step up because it isn't a case of following along with the tutor - albeit making your own variations - on a single project. This time each of our group of five had to come up with our own project and design, within the constraints of available materials. Then the tutor Melissa Hunt then worked with each of us to identify the techniques we would need and indeed it the idea was feasible. The one thing I was sure of was that I wanted to make a cuff-style bracelet.

Plus I like spirals, coils and curves - in metal, fabric, etc - and have often used them. Working in wire recently has seen me play with those shapes a lot.

The question was how to bring this elements together. But as I was sketching and thinking I noticed the ring I was wearing, which had a small coil of wire soldered to it.

That helped me with one element - I would use silver wire to make raised coil end pieces for the bracelet.

On the left you can see a test coil in copper as I played with width and shaping.

But then I was stuck. I wanted to reflect these motifs on the body but couldn't see how.

Melissa had the answer. I could try making a series of scrolls in copper wire and use a roller print technique to impress them into the silver. Roller printing involves annealing (softening) the metal and then placing it and a texture between two large rollers to press the design into the piece.

So the first jobs were to cut the sheet metal to length and to test the roller printing idea on a scrap of copper. I need a lot of sawing practice but with a bit of vigorous filing I did produce a neat piece.

As for my test piece: 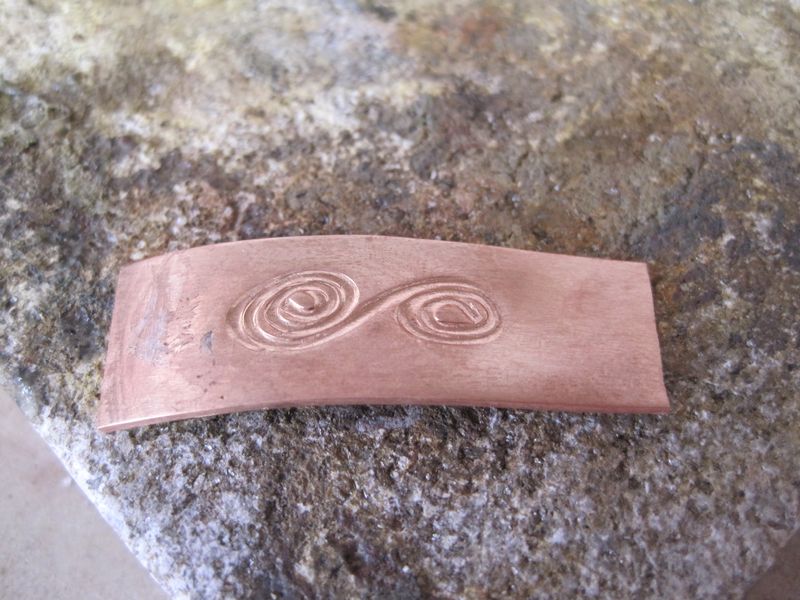 There was some distortion but that was useful in working out the settings for the real piece.

Plus it showed that there is no chance of reusing a a copper motif. 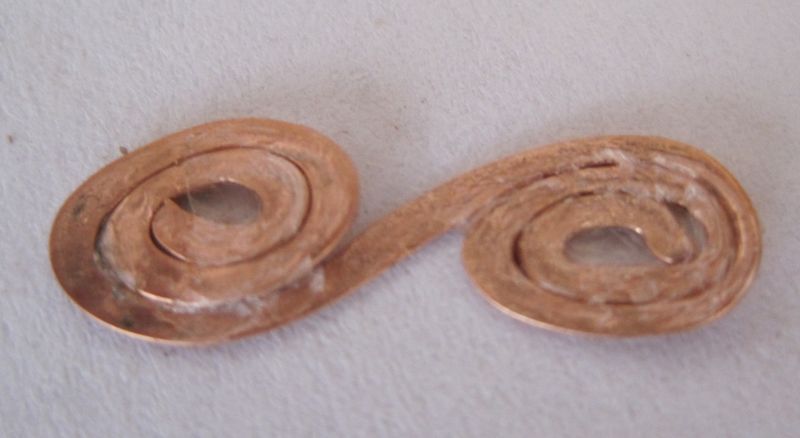 So after a spot of gentle scroll rolling it was time for the moment of truth. I attached my motifs to a strip of sellotape and alligned them on the annealled bracelet metal. 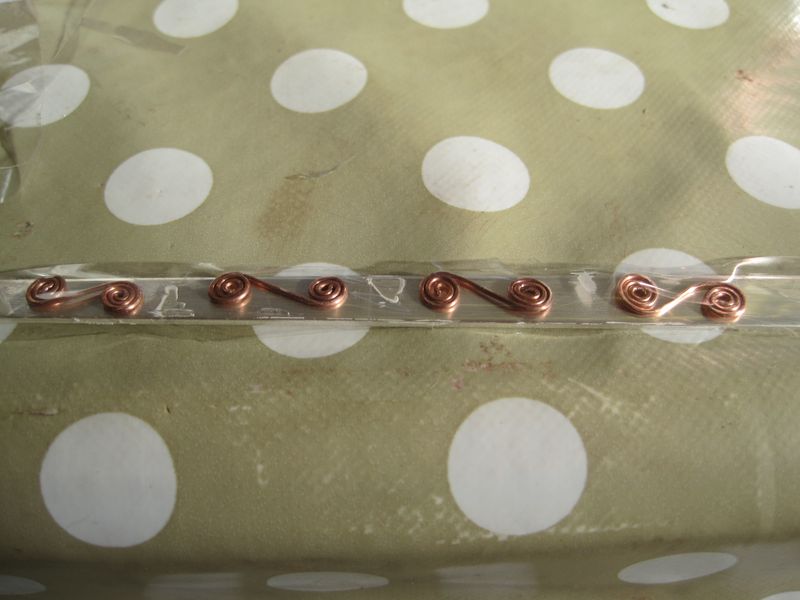 Then the moment of truth - the whole thing went into the rollers. I didn't get it quite right at the beginning - so admit that one end of one scroll impression isn't perfect (the pictures avoid this little blemish) - but over all it worked. Then all that was left was shaping the ends, crating and attaching the ends and shaping the actually bracelet with all the intermediate heating, cooling and cleaning stages.

Plus Melissa had a new challenge for me. We'd orginally talked about soldering the wire motifs to the bracelet but she now reckoned I should consider riveting them instead. This meant working out how to build pins into the centre of my spirals (as in my test copper cols, left) and drilling holes into my piece.

The drilling worked with a lot of help from Melissa because we had trouble with fine enough drill bits and then it was time to rivet the piece. The drilling is the scary bit - if the pins fit in the holes (and they did) the rest is about good soldering and finishing.

Silver soldering involves painting your joint with borax flux, heating the area with a small blow torch in one hand and adding tiny pieces of silver solder with tweezers. 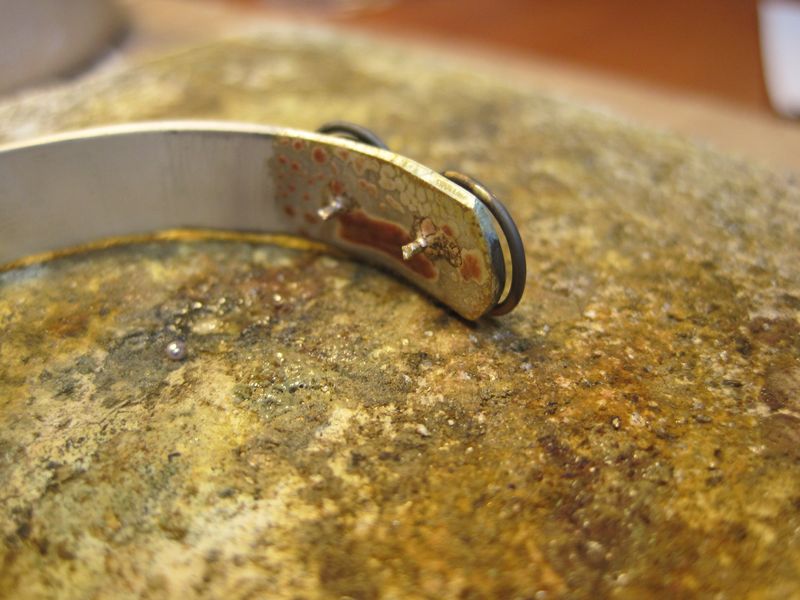 Then you snip of the excess pins and file down the bumps. This is another worrying moment. My joints held but one of my fellow students managed to file through one of hers and had to start again.

And then there is plenty of polishing and cleaning up to do before a final shine up in the tumbler to produce a pretty piece. 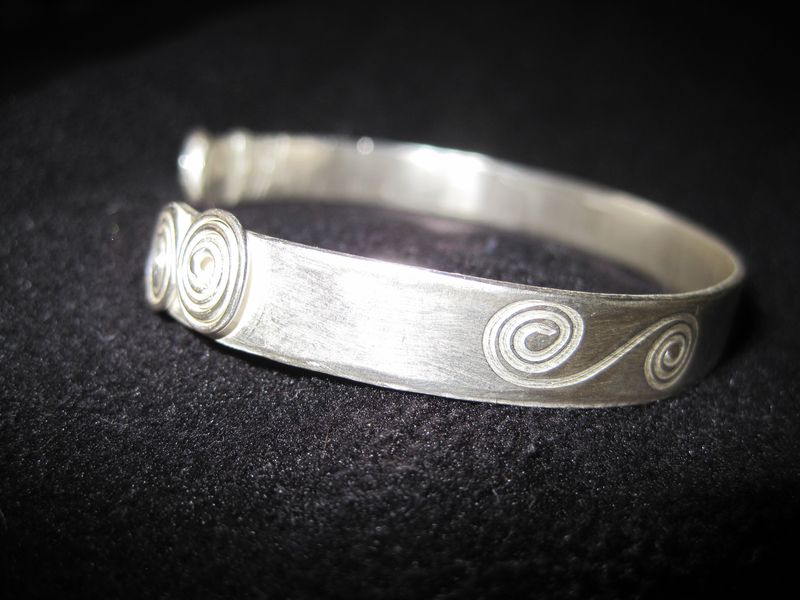 There's something about a new tea towel - the crispness of the fabric and the interesting colours and prints. It is a strange thing that we put so much design effort into something for wiping plates.

In fact my Gran used them for décor as well. Every new year a bright calendar tea towel went into the plastic poster hanger on the wall and the old one entered drying rotation. And as a drama school student years ago I had a tea towel print of Shakespeare’s First Folio on my bedsit wall because I couldn’t find it on a conventional poster.

The designs often catch my eye and I found myself wondering if they could put to other uses. Then I saw one particular design while I was casting about for the perfect project for a handmade gift for a particular individual - and suddenly inspiration struck.

Fold a tea towel into thirds length ways and you can see it becomes just the tings for storing double pointed knitting needles - well it certainly looked like that to me.

So I embarked on a test project for myself with two tea towels (spotty for the lining), some interfacting and bias binding. 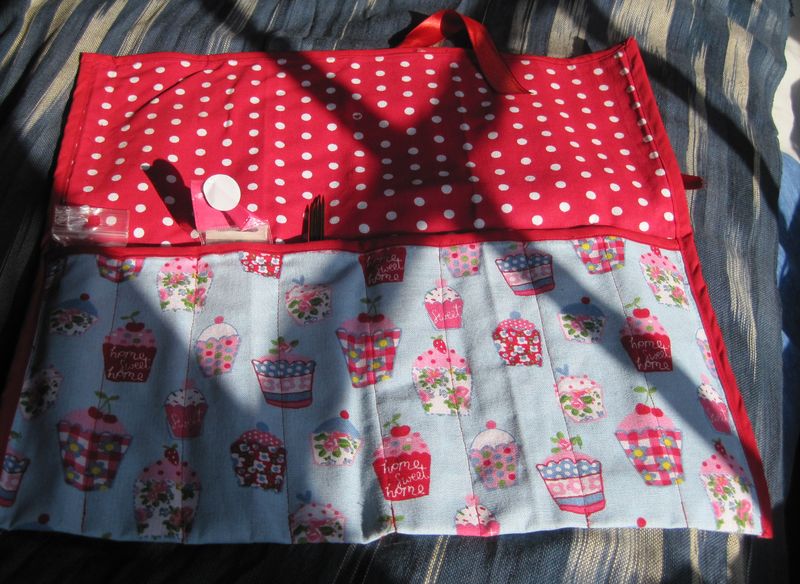 It’s a simple design, creating an envelope and flap and then stitching divisions into the pocket. 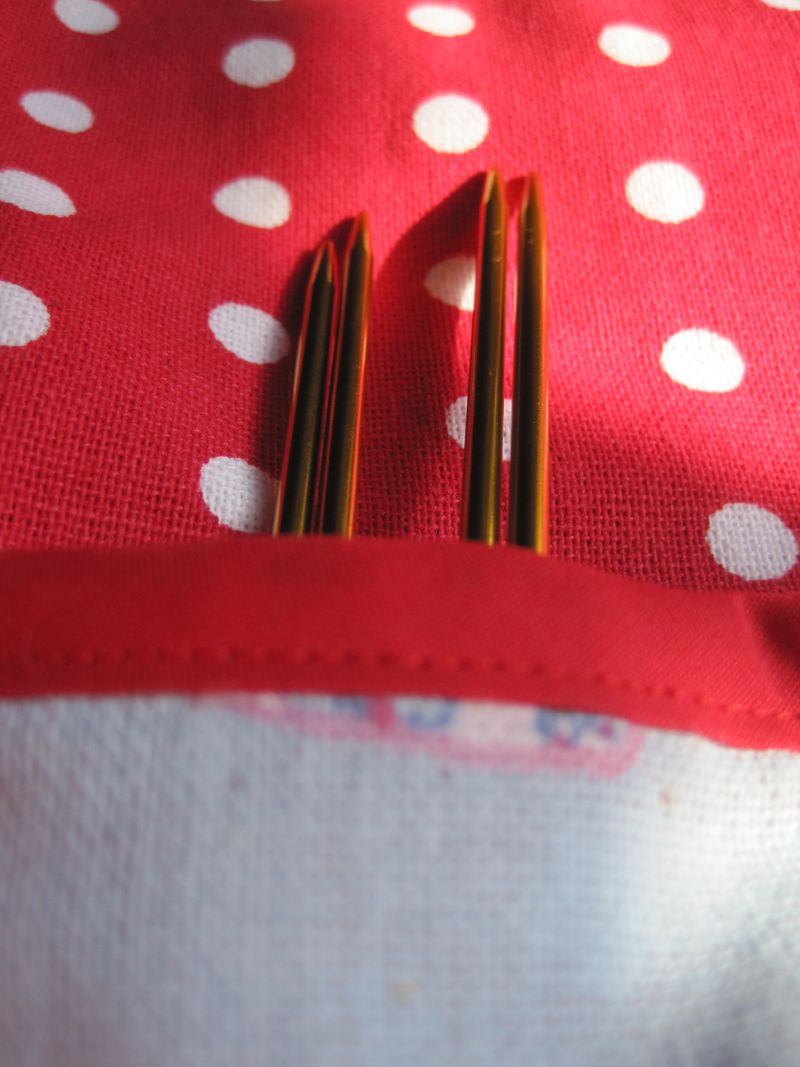 With my own test roll, I found a tea cup button, to secure a ribbon tie.

All that was left to do was to organise my DPNs - good news for my partner who is now less at risk of a dnagerous encounterwith a stray pointy stick.

It worked so then I could make the gift,. the “Tunnocks Teacake special” – a design chosen because the friend is a fan of the snack.

This one is lined with some toning fabric rather than another tea towel but the same principle applies. 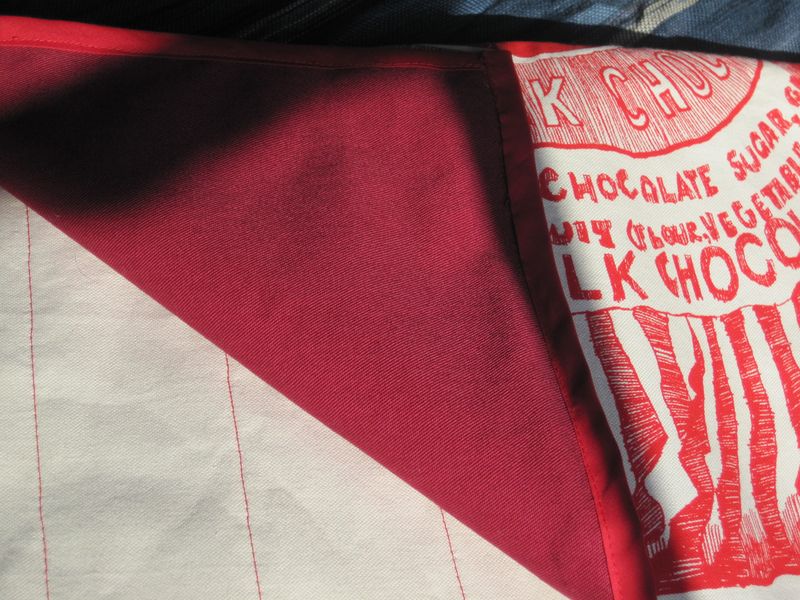 I was so pleased with the result I was tempted to keep both but in the end I delivered the gift to a happy reaction. 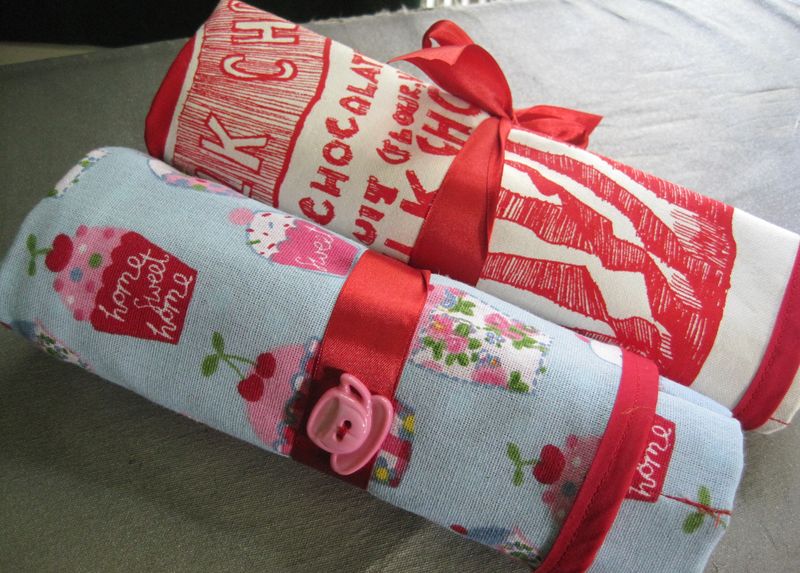 Isn’t it great when a plan comes together?

This morning the knitivist GingerKnits of p/hop fame had a moment of genius, coming up with the prefect metaphor for everyone worried/angry about the impact of the current NHS reforms.

The idea is to knit an NHS logo - the bigger the better is how one conversation is going - documenting with video or photographs the time it takes to craft something. I'm keen to get a group together to craft a logo while talking (on camera) about why the NHS is important to them.

And then to show how quickly it can be unravelled - with a giant version for example this could be done outside a hospital, DH building, etc.

There is also the idea that you could craft other objects that show what the NHS means for you - an inhaler, incubator, healthy limbs - using the same recording and ripping approach.

At the moment this is the germ of a protest idea but @GingerKnits, the Undercover Owl (@UndercoverOwl) and me (@lpurplepenguin) are co-ordinating the suggestions on twitter (#unravellingNHS - my major creative contribution so far), via our blogs and on Ravelry.

I'm paricularly keen to hear about ideas for recording the projects and showing the passage of time, and for help working out patterns for the letters N, H, S - especially for a freestanding S.

If you are angry or frustrated about the NHS changes, this could be the protest for you encorporating as it does the beneficial mental health and calming affects of craft.

Making life difficult for myself

I'm planning a mini knit-a-long with a friend to take on vintage style short-sleeved Fair Isle jumpers. But being a bit out of practice with colourwork I decided to take on a couple of smaller projects first. But I also decided to go for a spot of self-improvement by learning to hold one colour strand in each hand.

This takes some practice to ensure even tension and I find I have to swap the yarns between my hands a lot because I can only manage some tasks with my left. On reflection a practice swatch with something relatively simple like a traditional star was probably the best way forward - instead these reindeer have been unpicked a few dozen times but at least they don't look too mutant now. But more practice required. Meanwhile, I console myself with some lace and wire making successes. 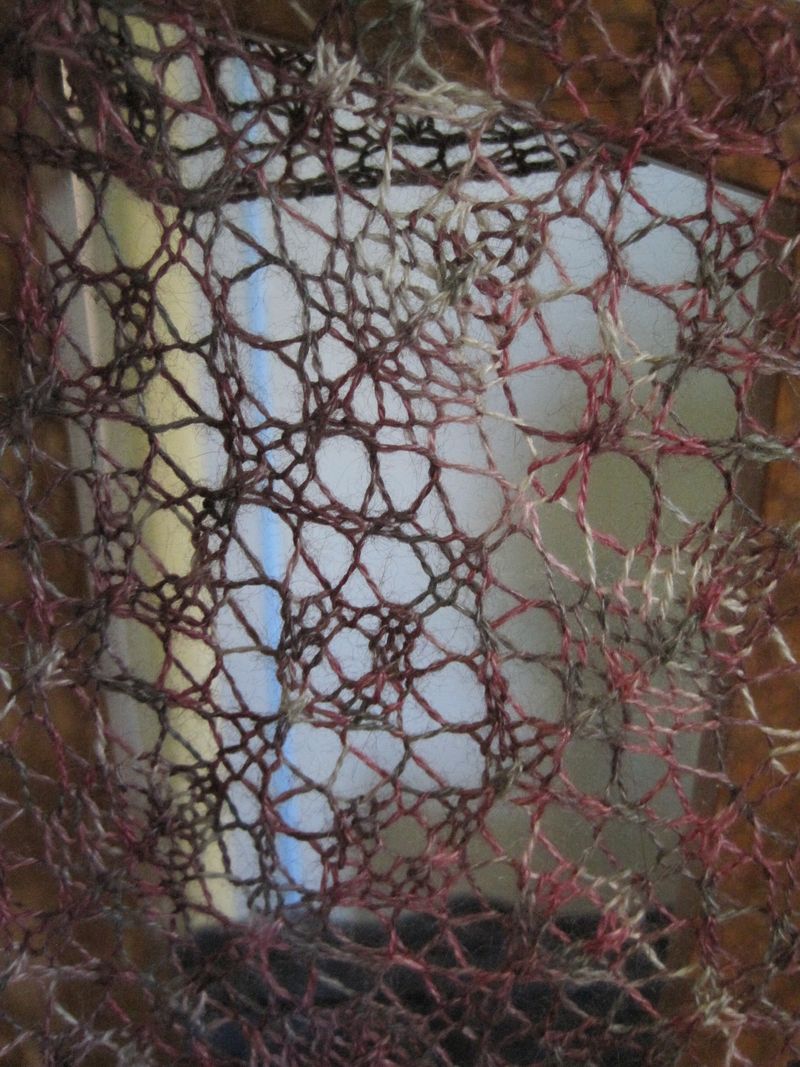 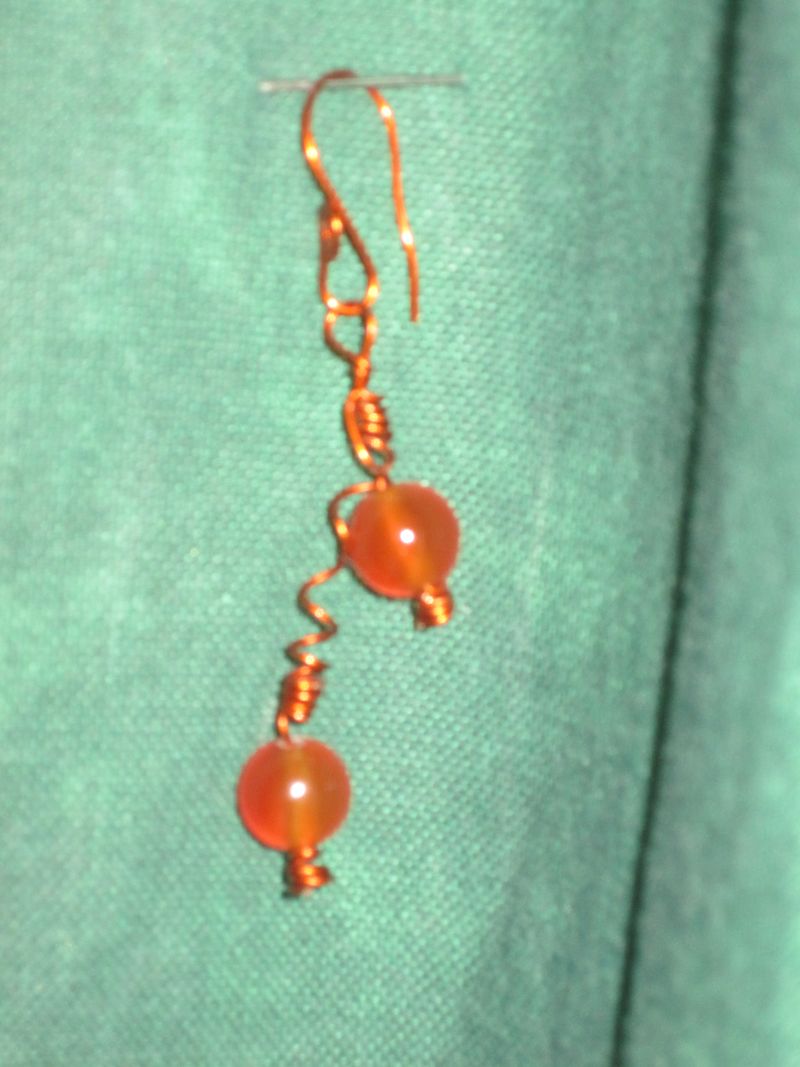 Find out about other people's Making Monday.

I recently decided to improve my crochet skils beyond embellishments and edgings. So I borrowed Stitch 'N Bitch Crochet: The Happy Hooker from a colleague and  surprised myself by producing a presentable bag first off. 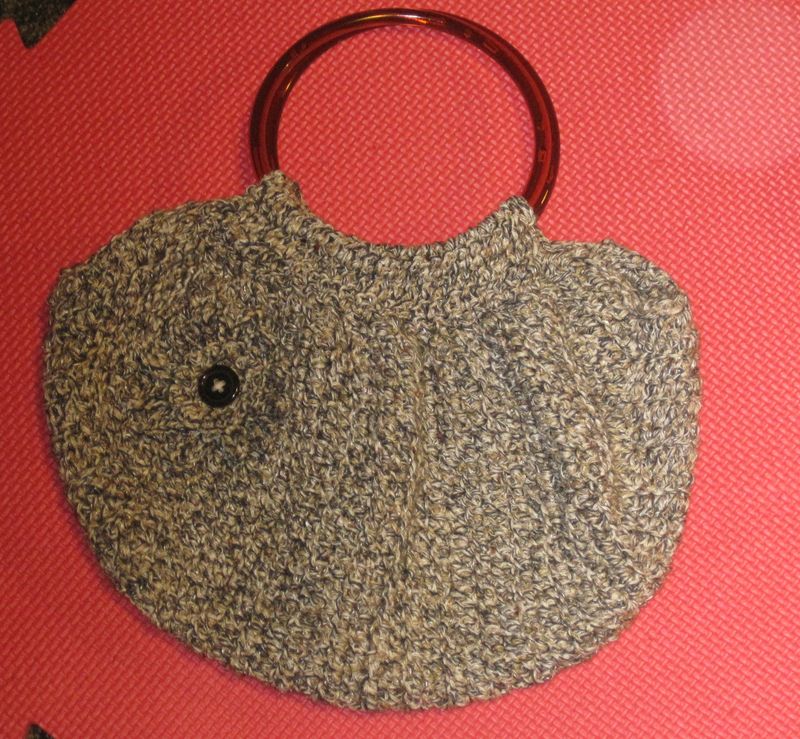 Now if I could only make as much progress with tatting.

It seems that my memories of my first trip to Sicily will be in the form of things that do not yet exist in their final form.

There will obviously be the online photo album and the new silver charm for my "travellers tale" bracelet just requires a jump ring but this is merely the tip of the iceberg.

In Cefalu, where we were staying, two things caught my eye; the number of shops featuring beaded and wire jewellery and a little outlet for a traditional weaving and textile business featuring shawls, crocheted items and what from a distance appeared to be skeins of yarn.

So one evening I arranged to meet my very craft tolerant other half in an establishment that purveyed beer and set off for a browse/shop/inspiration-seeking wander. Several jewellery shops later, having being intrigued in particular by what you can create with half a zip (watch this space), I stumbled across one featuring exactly the types of wires and bead/semi-precious stone jewellery I've been learning about. Even better it had a large basket of these: 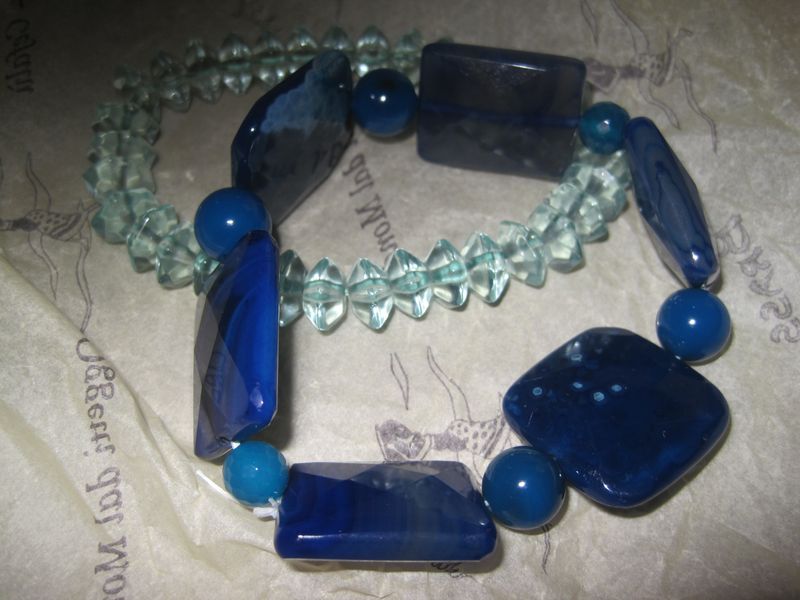 Elasticated bracelets length loops strung with beads and stones which you could just wear as a bangle - or like me have mentally reworked into necklaces and earings by the time you reach the till.

And then I popped into the interesting textile outlet and made a fascinating discovery - in Sicilian terms all we knitters and crocheters have been wasting our time. If you want a scarf, all you do is takes a skein of yarn like so... ... tie a couple of strategic knots or add a piece of ribbon and lo, you have a scarf. 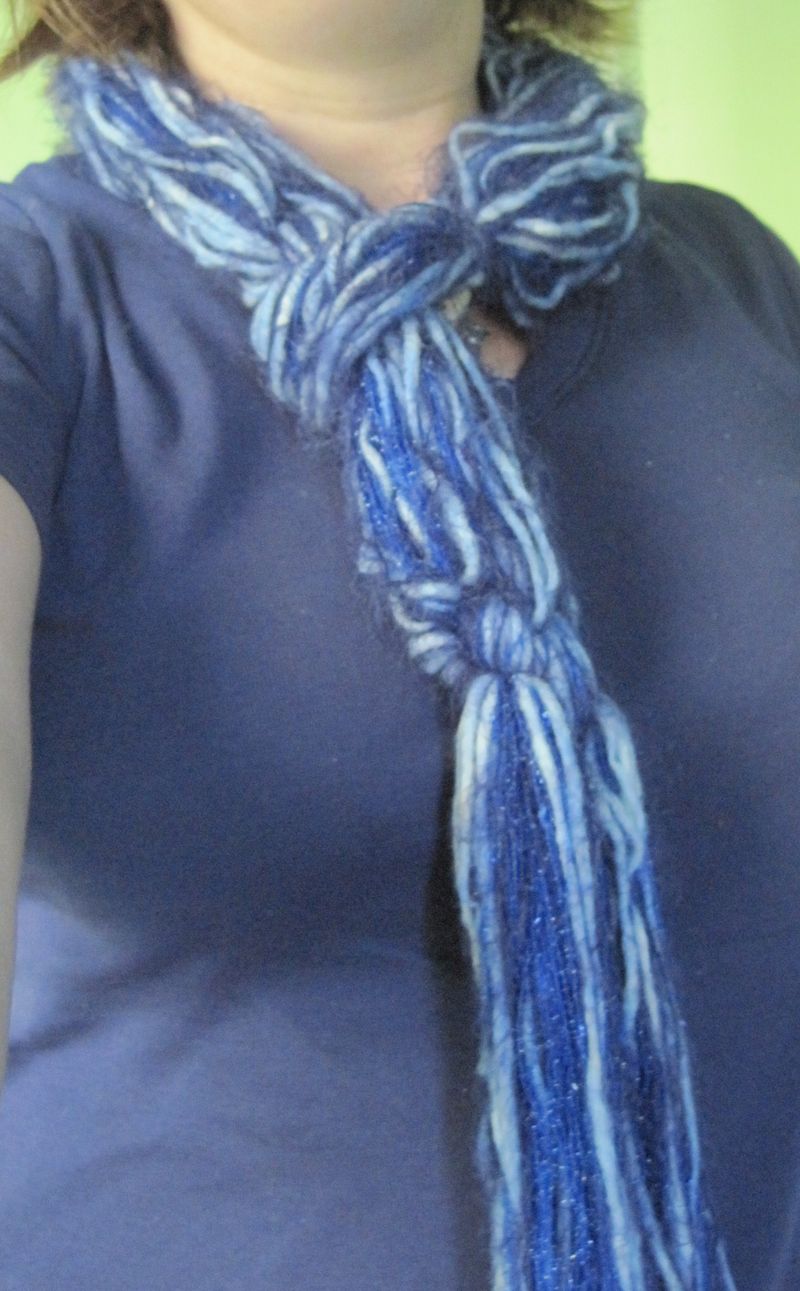 Me being me, I'm already unravelling the knots and winding the yarn so I can turn it into a different type of scarf.

Meanwhile check out more of this week's Making Monday posts