Just because I've been in an Olympic bubble doesn't mean I stopped knitting. Instead, the needles have been touring the venues with me.

I decided to attempt various Ravellenic Games challenges - knitting challenges for during the Games period - with an additional twist, one project was to be done during the period of the fencing competition when I was volunteering.

Amazingly it is possible to complete a lace scarf travelling to and from a venue, in your breaks and the downtime I must have had at home at some point. 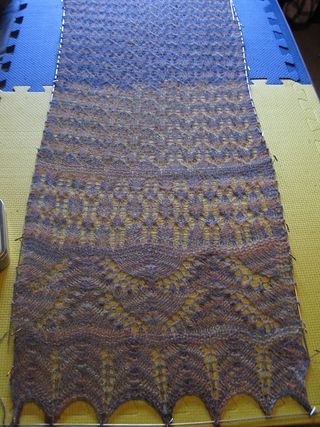 Once I emerged blinking into the light, there were other events to attend. 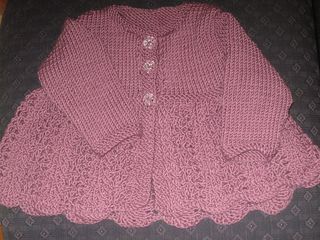 This baby jacket for a new little cousin had a trip to the handball and the athletics.

While the beret - the pattern for which I tech edited mid Games - went to the basketball and the mountain biking. 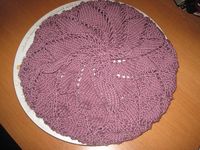 Confessions of a sports junkie

It seems that when it comes to the Olympics, I'm a sports junkie par excellence. I didn't think I was but then I found myself saying: "A spare ticket for handball - why not."

Suddenly having never seen a sport before or having any idea of the rules didn't matter. I had a ticket, I could learn. So when I wasn't in the fencingtron I found myself at a variety of venues, quite often roaring my head off.

There was the athletics, on a beautiful sunny August evening.

There was decathon high jump...

Then there was basketball which oddly was not as exciting as I expected.

Mountain biking at Hadleigh Farm in Essex offered an exciting race and glorious weather in a picnic atmoshpere.

And I was mighty glad it wasn't me toiling up and down that gruelling course.

But the best for me was handball - fast, furious, engrossing. I can't recommend it enough.

If you are interested in seeing more to the sports or the Olympic Park, a full set of pictures is here.

And very soon I'll have attended a range of Paralympic sports including "murderball" aka wheelchair rugby, which I'm already very excitied about. Handball, wheelchair rugby - fast and violent, am I sensing a theme here?

Emerging from the bubble - or surviving Tron

There hasn't been much in the way of activity on this blog of late. One of the main reasons is this:

This is the fencing arena for the London 2012 Olympics. Its coloured lights outlining the pistes

drew comparisons to a certain sci-fi "classic". Becoming known to some as the "fencingtron".

And certainly volunteering as a London 2012 gamesmaker does take you into a different world - one of long days, excitement and exhaustion in equal measures, one off experiences and lots of smiles. And I wouldn't have missed it for the world.

In my case I was actually working in the arena as a piste minder - fecning's equivalnet of a Wimbledon ball kid, I guess. My job included running up the steps on to the piste during the breaks with a chair, drinks and towels for the athlete - developing some interesting juggling skills in the process; making sure armourers, coaches, equipment etc were in the proper places; keeping things tidy and safe; and plugging and unplugging athletes into the scoring system - a task that brings you into close contact with fencers' bums and occasionally finds you fishing between their legs.

It also meant that at times I was only inches away from a gold medal adorning an excited athlete.

It is hard not to get excited around sportspeople who have worked so hard to reach an Olympic Games. In the cases of fencing only around 30 people made it to each event, so this was a very special moment for them all as evidenced by the highs and lows of emotion. Teams almost flattening all around them as they celebrate reaching a final - I was briefly under a scrum of Romanian sabreurs - or an individual sprinting around the arena in joy. A real contrast with the loser so devastated they could barely be persuaded off the field of play.

Plus I was able to witness close up, the best and brighest in a sport I love - what could be better, especially when it is accompanied by making new friends and learning about how the behemoth of the Olympics actually functions.

In just a few days I'll be returning to the London 2012 bubble for wheelchair fencing at the Paralympics but before then I hope to share a few more of my recent experiences - some sport-related, some not.