The joy of teaching knitters and other crafters

Having just returned from France where I accompanied an Arena Travel knitting tour as the expert and tutor, I've been reflecting on why I enjoy teaching in the craft sector.

I teach a range of topics/crafts/skills including:

These bring me into contact with lots of interesting and creative people who want to learn something new. And in turn that challenges me to have all the information and skills to answer their questions, find new solutions and ensure they have a good time. 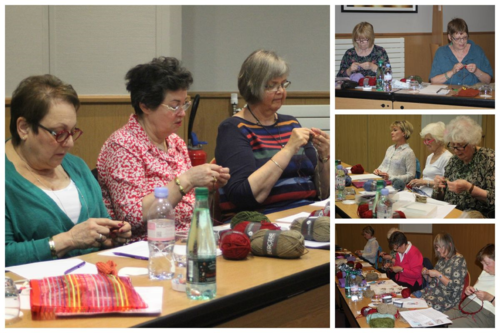 Which of course means I'm always learning as well. Plus I'm hearing about new projects and ideas as my students tell me about their crafty and creative lives. For someone who can spend days immersed in spreadsheets grading knitting patterns or writing at my laptop, this interaction is important and inspiring.

On the recent trip we looked at creating double-sided textures and cables, as well as tackling the Moebius cast on. Both things that can be steeped in the arcane mystery that certain knitting types attract. I both wanted to challenge my students and show them that with a little faith - in a pattern and themselves - they can tackle any knitting challenge.

And yes it was a challenge: Moebius knitting requires you to do a few rounds before you really understand that you are knitting outward from the centre line of the loop rather than from edge to edge of a cylinder. That was something that made the knitters think or puzzled some in equal measure. Although after a couple of goes everyone started to get it and after 3 or 4 rounds there were squeals of joy as shape and pattern revealed itself. 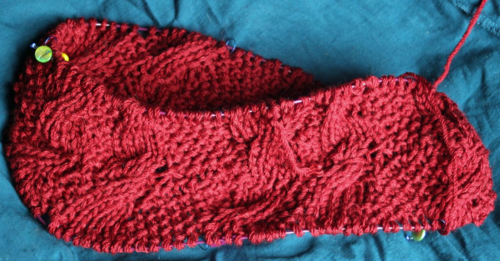 There is something very rewarding about helping people learn something new.

Of course, I'd set a challenge for myself too - finding solutions for any problems encountered by the students.

The other thing about teaching workshops is that you get plenty of exercise - or at least I do because I like to walk round and show things to my students, and go to them when they have any problems. I keep meaning to wear a pedometer for classes to see how much ground I cover.

Teaching this most recent workshop has given lots of new ideas for workshops and as soon as I arrange opportunities to teach them, I'll be sharing the news here.

Meanwhile do tell me what you'd like from a workshop.

A trip measured in knitting

Last week I was the tutor on a four night Arena Travel knitting holiday to Reims in France (more on the details of the trip coming soon).

As the week was about knitting, I decided to take a leaf out of author Stephanie Pearl-McPhee's (aka Yarn Harlot) book and measure the trip in knitting progress. Especially as I've been having some discussions recently on how much knitting to pack for a trip.

Travel to Reims was via Eurostar from London to Paris and then a coach to our final destination. That meant two and a half hours on the train and a couple more on the coach so I decided to put two projects at the top of my bag for variety. 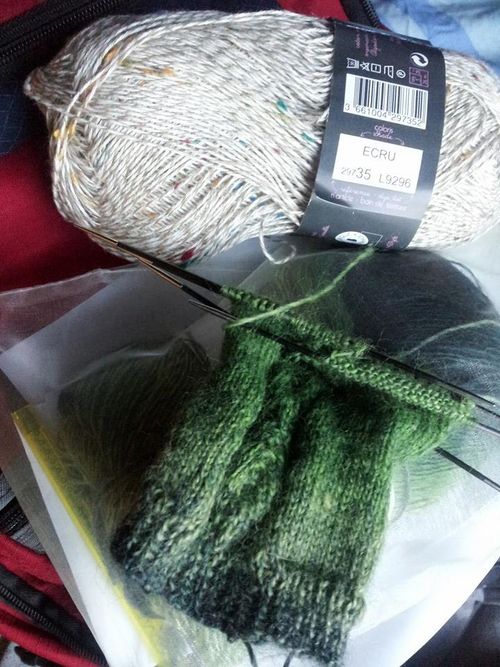 The large ball of yarn is some Bergere de France Bigarelle linen cotton, I'd been given to try out. So with the hope of picking up some more at the Bergere factory shop later in the week (a successful plan that resulted in 600g of the yarn in blue and 600g in beige), I decide to swatch for a summer cardie.

The other project in case the swatch was dull or didn't work was a sock with a leaf motif that turns with the heel, I've been plotting.

Things didn't go quite to plan though...

There was a power failure in the channel tunnel which of course resulted in more knitting time. So much so that the swatch was almost complete before we left the UK and the heel being turned on the sock by Reims. 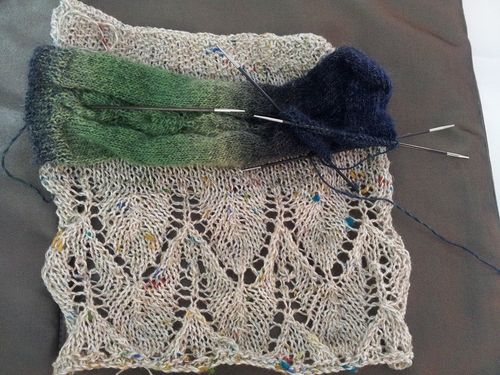 Day 2 was all about sightseeing including a champagne vineyard, paying our respects to Dom Perignon and the Reims cathedral with features spectacular stone carvings and stained glass windows (most people on the tour also located at leas tone yarn shop in case of emergencies).

There was still some knitting time - sitting on the coach, coffee stop - so more sock progress plus several experiments (and associated frogging of an idea for a chunky lace wrap/scarf with a drop stitch wave pattern). 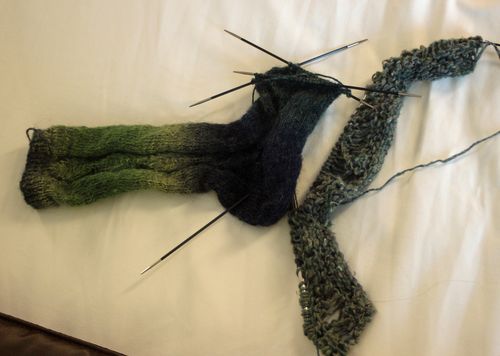 Day 3 was what I was looking forward to the most - a tour of the Bergere de France factory, meeting the Bergere team and seeing upcoming patterns as well as grabbing amazing bargains in the factory shop. 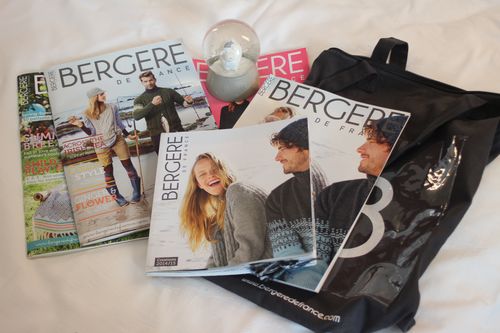 So there wasn't a great deal of knitting time because there was so much to see plus the lovely gifts above to be perused. That said the leaf sock was ready for grafting at the toe and the lacy scarf was working out. 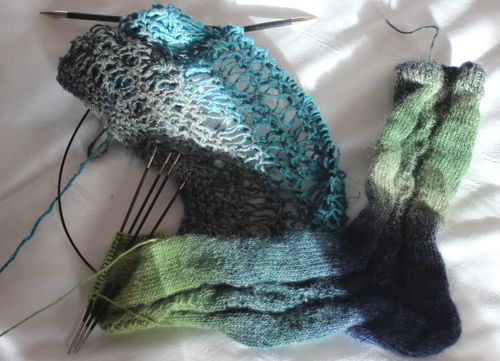 Day 4 was all about other people's knitting, because it was taken up with my workshop on reversible cables and moebius cowls. I may not have knitted much but my 16 pupils did plenty so it was a very productive day.

Plus I did manage to do the cuff of another sock design somewhere between the champagne cellar tour (and tasting) that followed the workshop and the bucket of Hoegaarden I finished my day with. And so it was time to travel home. Our return travel day didn't feature any delays although there was an impromptu follow up to the workshop on the coach - so less time for knitting. Just enough to reach the last pattern repeat before the heel. 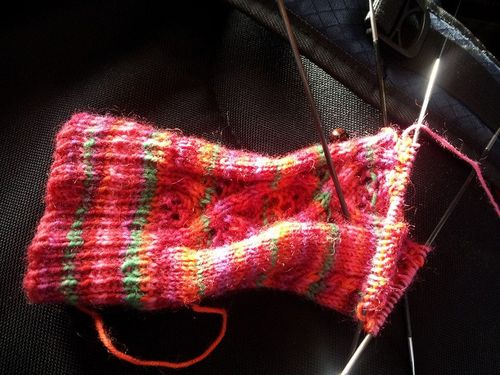 So that's more than a sock in total, a large swatch for a cardie design, progress on a scarf design and a lot of cables demonstrated. An a good example of why I always pack a lot of knitting for anytrip.

Off the needles - knitting through life

The last month has been eventful Chez Penguin - some good, some bad. Involving a lot of travel - some expected, some not. There has been a fair amount of stress and a lot of emotion.

But through these things one calming and comforting factor has been knitting. I find it relaxing when I travel, occupies my mind when I'm waiting around and calms me down.

With the result that quite a few projects are off the needles or making a lot of progress.

This non-stop period started with a holiday in Austria. There was less skiing than there might have been due to me picking up a knee injury at the National Veteran Fencing Champs the week before - I'm such an action woman. But that just meant that when I wasn't on the mountain there were more opportunities to sit with my feet up in the hotel enjoying delicious cake and working on a few yarnie projects.

Which, in turn, meant my vintage inspired hat and mittens were available to wear on the colder days. 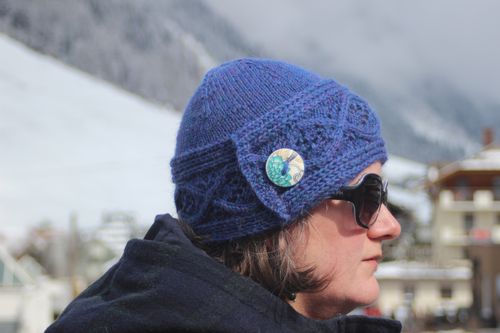 And I was able to make a start on my Surf on Slate shawlette using some fab Eden Cottage Hayton 4ply which has a touch of cashmere and is a delight to knit with. 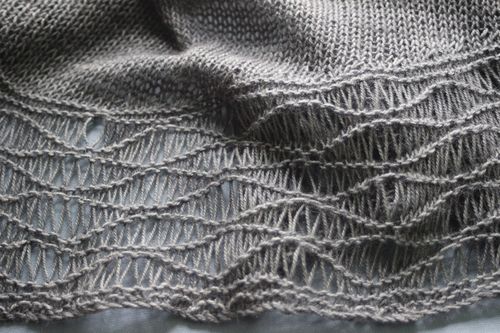 This is an idea I've had for a while and is part of a series of shawls inspired by childhood experiences in Donegal.

The next few weeks were a sad time for my family and indeed took me back to Donegal. So the shawl was soon off the needles, as were an as yet unnamed pair of fingerless gloves - an unlabeled ball of sock yarn orphaned in a project bag was very clear on what it wanted to be. 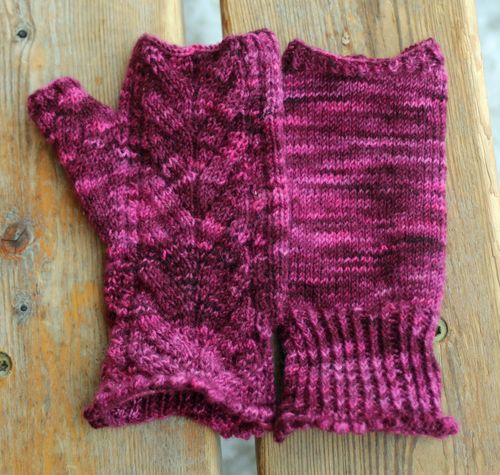 Gloves of all types make great portable projects as do socks so I've made good progress on a couple of pairs - Hot Cross Socks  (well it was Easter) pictured in the wonderful Regia Design Line Sizzle colourway and also some with a leaf design. 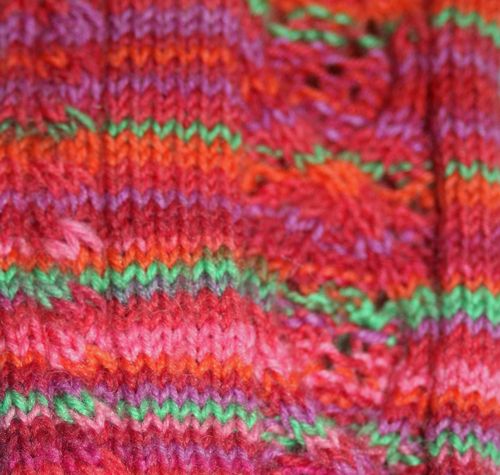 And in case I got bored, there were swatches and prep for the workshop I'm teaching in France this coming week.

Now I have to figure out what projects will go to France with me and what I might get off the needles. There are Eurostar journeys and coach trips, so let's see if I can get some more socks finished and perhaps make some significant headway on one or even two lace projects.