Tip of the week: Casting on with double pointed needles 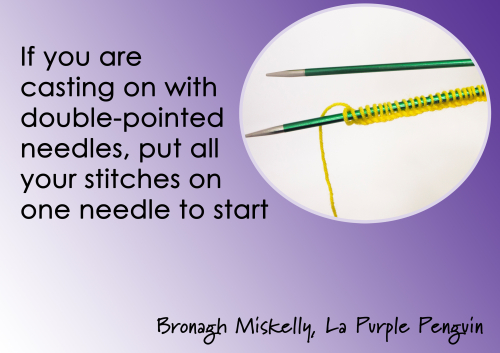 Hand knit sock season is definitely on the way so the next few tips are intended to help.

Your preference for what needles you use to work on on small items in the round, like socks, will depend on your knitting style. Some people like using magic loop with a long circular, some small circulars and some like me will be more comfortable with double pointed needles.

However, the idea of having more than two needles on the go can be off-putting.

Casting on is no different to any other piece of knitting - you cast all your stitches on to a single needle. There is no need to try to hold extra needles before you're ready to start your first round.

Next divide your stitches evenly between three (or four) needles by slipping the stitches from one to another. 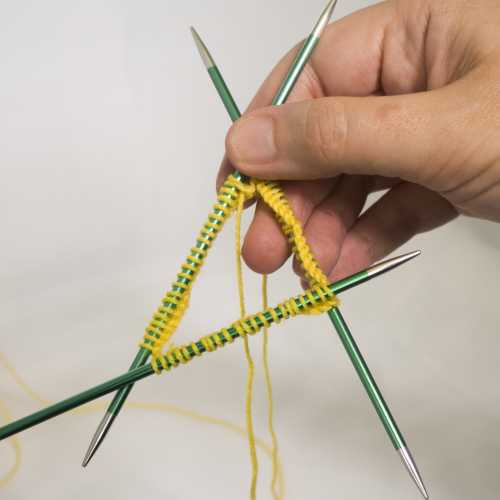 Then keep going in the round. 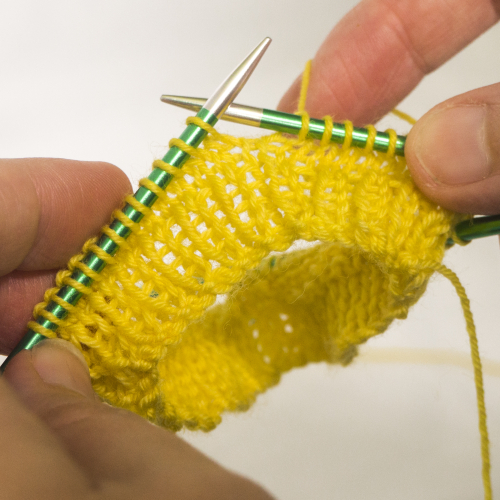 Tags: double-pointed needles, knitting in the round, sock knitting

My two patterns in  Knitting Magazine this month (issue 223) are all about comfort and as I am having a sofa day today, I'm delighted to have the samples on hand so I can try to replicated the pictures in my own home. 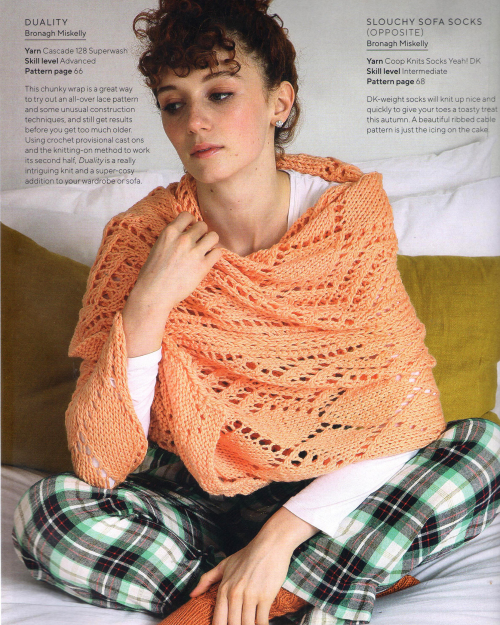 Duality is a chunky lace wrap/bedrunner with an unusual construction that I hope you will all enjoy. The lace is worked separately on either side on the central spine running along the full length. The yarn is Cascade Yarns 128 which gives a soft, cuddly finish. 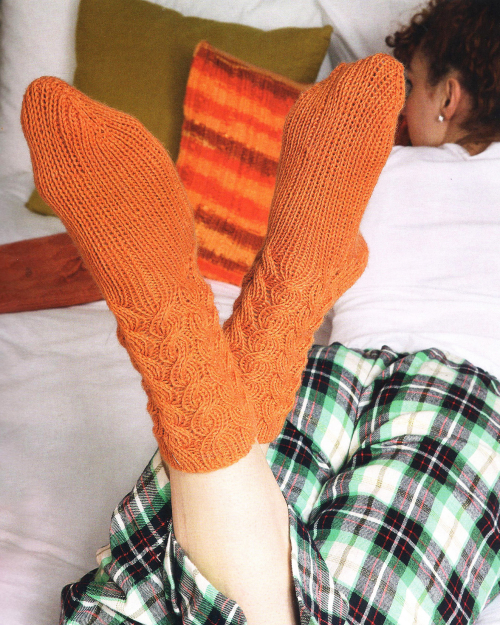 The Slouchy Sofa Socks are intended to be indoor socks for relaxing in and feature cables and ribs as well as a ribbed short row feel. For extra squishyness, they're knitted in #SocksYeah DK.

Tip of the week: Knitting in the Round 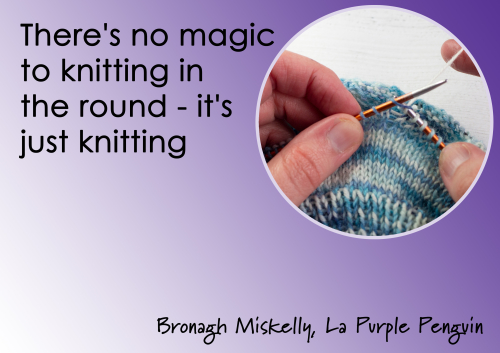 This is probably the simplest tip I can give you. Knitting in the round is just knitting.

You make your stitches in exactly the same way, you just go round and round in a spiral rather than back and forward in rows. But you don't put your needle in a different place or put the yarn round in a different way. 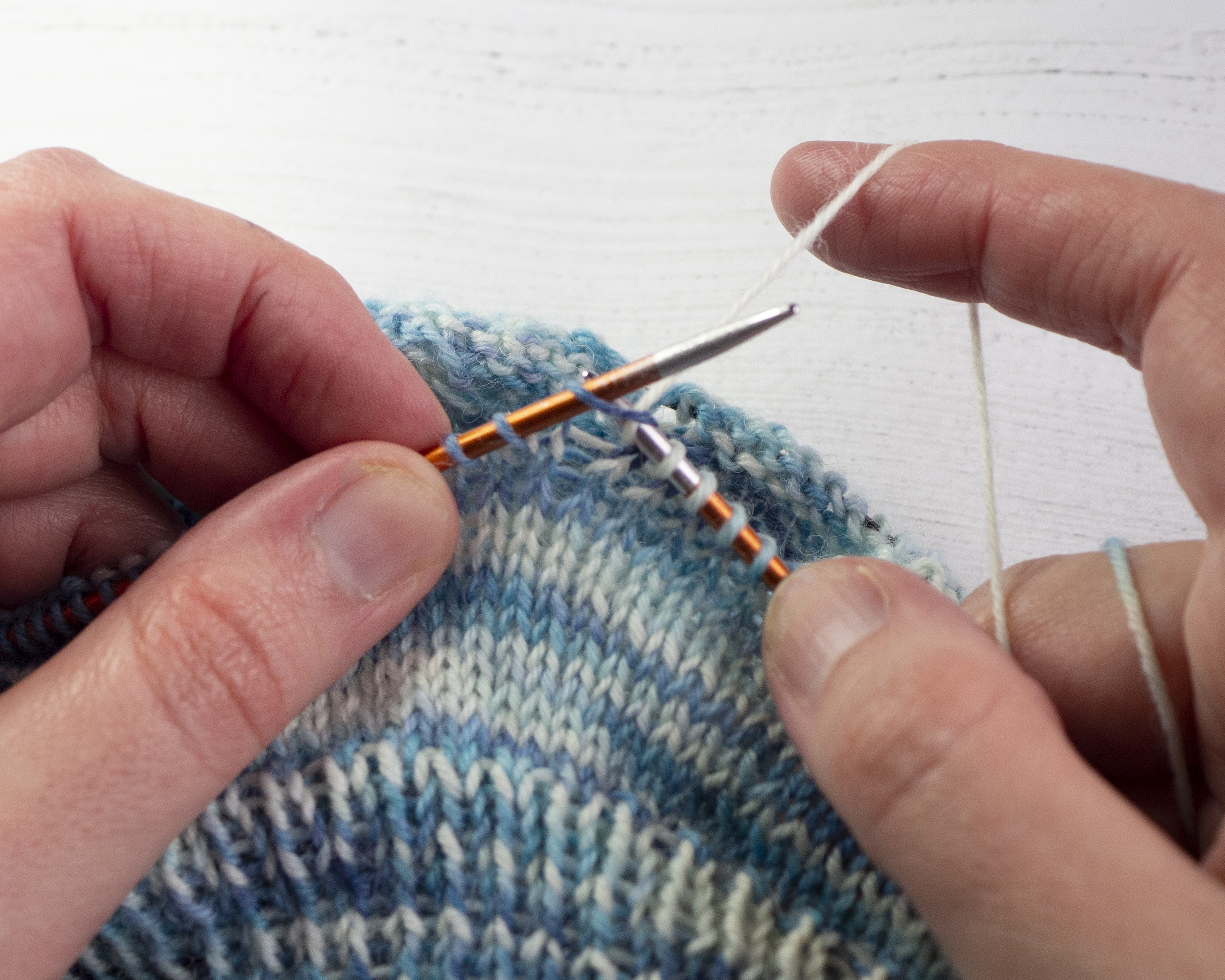 In the picture you can see the other side of my hat on a circular needle but it is just there, I am still concentrating on the next stitch on my needle and using the same flicking technique as I normally use with the yarn in my right hand.

The only thing to remember - and it is the same on circular needles or double pointed onse - when working in the round you are always knitting the right side of your work. So to make stocking stitch you knit every round and garter stitch is knit one round, purl one round.

Tags: knitting in the round

Tip of the week: There's no shame in ripping back 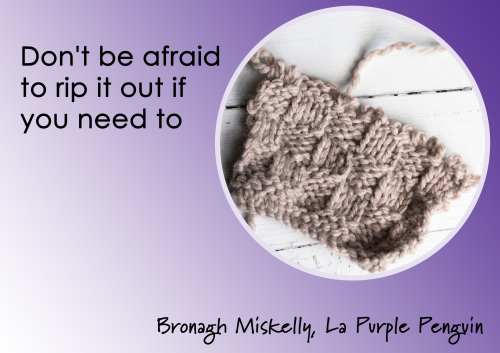 OK, I'm going to say it: Some times the best thing to do is rip your knitting back. 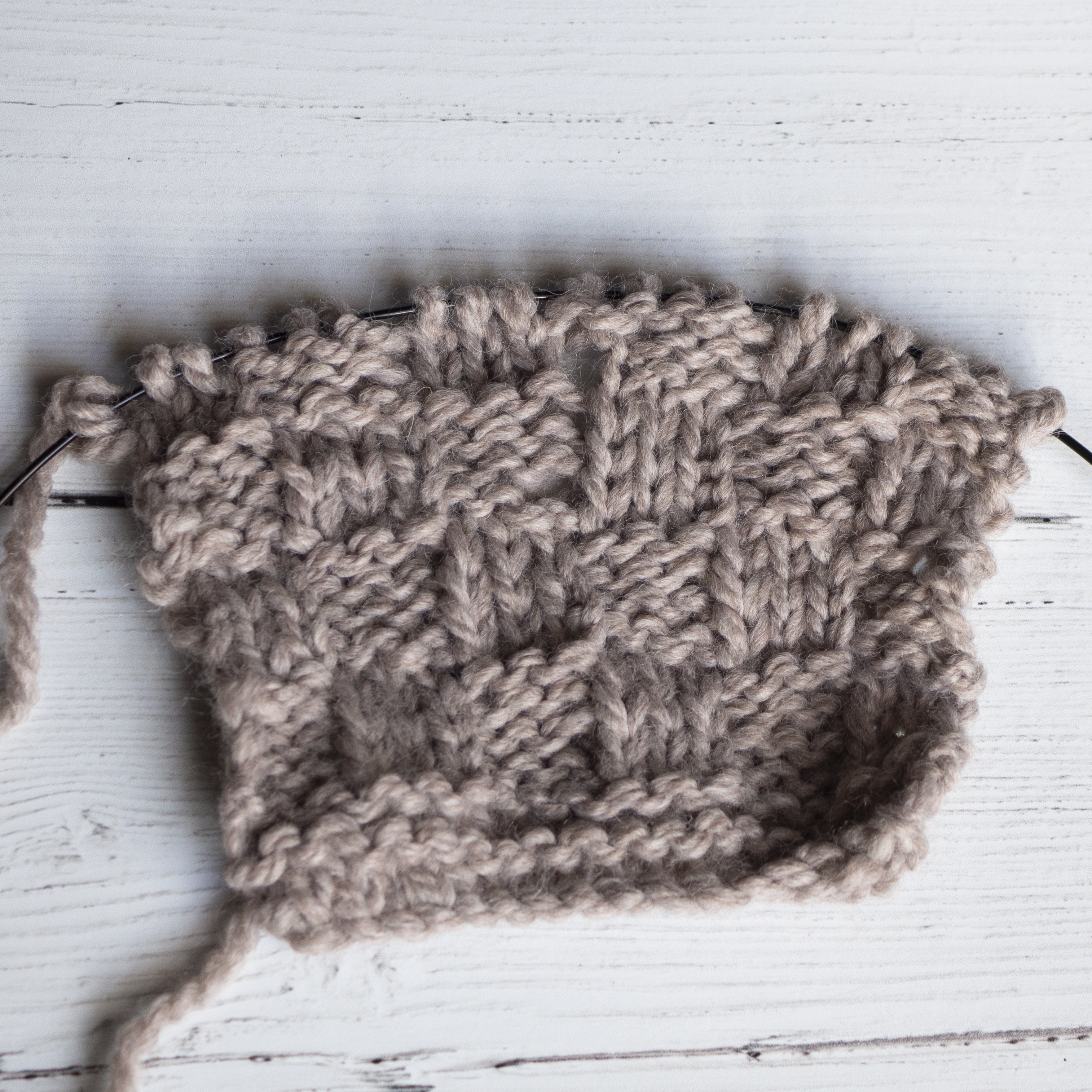 I know it may seem painful, but it's true.

Sometimes a mistake can't be fixed by dropping a stitch down a couple of rows and using a crochet hook to work it back up and it may be easier (or less time consuming) to rip back a few rows. For example, if you look at the centre top of the swatch pictured above, you will see an extra column of stitches created by an accidental yarnover. In a case like this you'll never get the tension right if you just drop the extra stitch so it is best to rip back.

In the case of a wrongly crossed cable or a lace repeat that has gone askew, it may be possible to drop a few stitches down and rework them. But you need to weigh up which will be more time consuming or stressful, making this repair or ripping back and reknitting a few rows.

In these cases, rather than feeling fed up about wasted time, try and think of this as an opportunity for some more knitting, and you do like to knit, don't you? 8-) 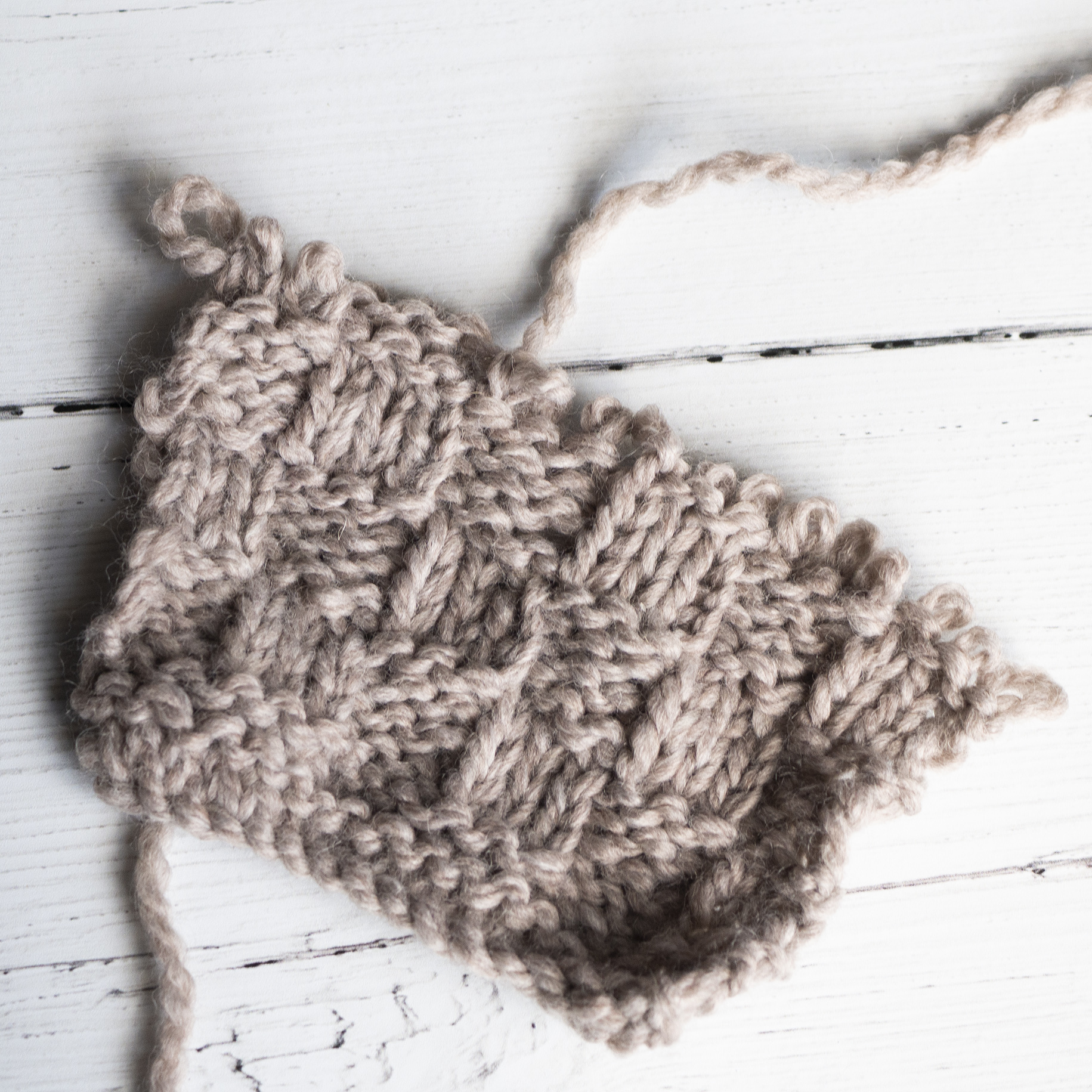 Tip of the week: Catching a dropped stitch 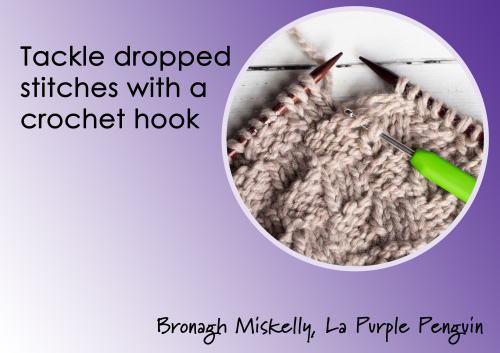 If you notice a dropped stitch a couple of rows down, don't panic. If you are armed with a stitch marker and a crochet hook, all will be well.

First grab a removeable stitch marker or a safety pin and feed the stitch on to it so it doesn't unravel any more and work until you reach the point in the row where the stitch should be.

Use a crochet hook to work up the column of stitches by inserting the hook into the stitch loop and pulling the bar of the yarn though the loop. Then repeat for the next row until you reach the top. 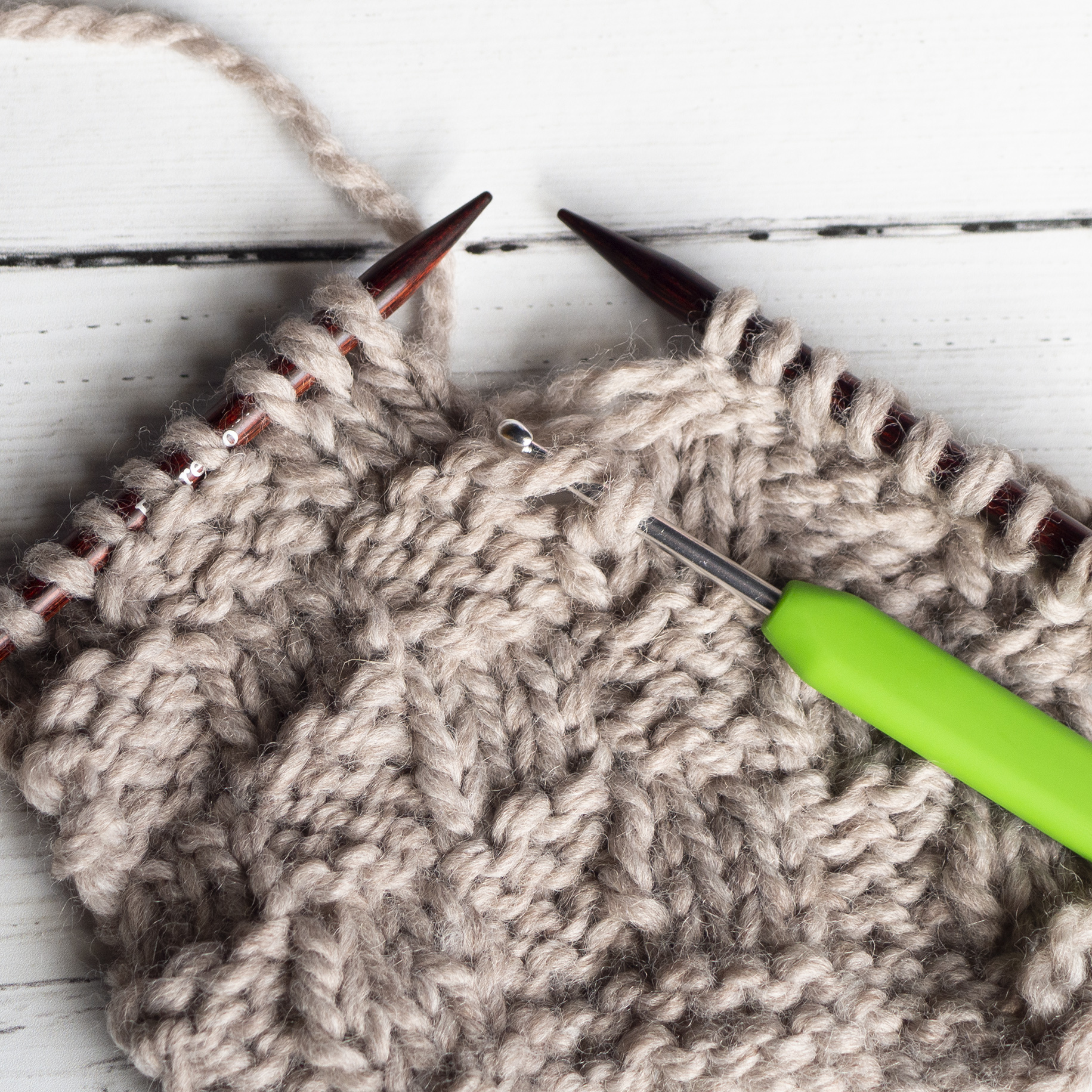 If you have to bring it up several rows it may feel quite tight towards the top, especially if it is a couple of rows since you dropped the stitch but your yarn should even out in your repaired rows when you block your work.

Keep a close eye on what direction your stitch should be, ie knit or purl. I usually turn my work over so that the knit side of the stitch is facing me when I use this method for what would be a purl stitch on the right side.

You can also use this method the fix a knit stitch that should be a purl and vice versa. Consciously drop the stitch down to the mistake and use your crochet hook to work it back up correctly.

Posted at 10:58 AM in knitting, knitting techniques | Permalink | Comments (0)

Tip of the week: Write out a line of pattern to decode it 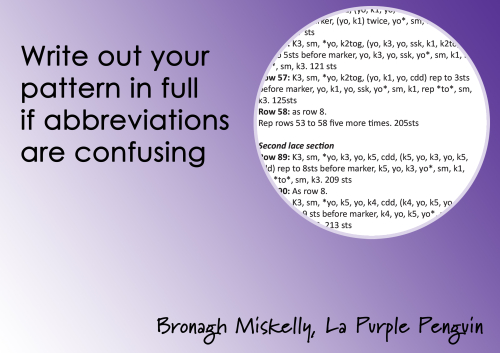 Did you know you read code?

Knitting patterns are coded instructions on how to do something - a programme for our hands. But between abbreviations, brackets and repeats, sometimes our code breaking skills can let us down.

If that happens, just  grab a pen and paper and write out the line you are stuck on in full, stitch-by-stitch, and it will start to make sense.

As with so many things with knitting, just take your time.

Have you noticed that I like detail? I don't tend to make plain items but that doesn't mean all over pattern.

The Hemingford sweater has a plain stocking stitch body with loose lacy sleeves which add a little glamour. 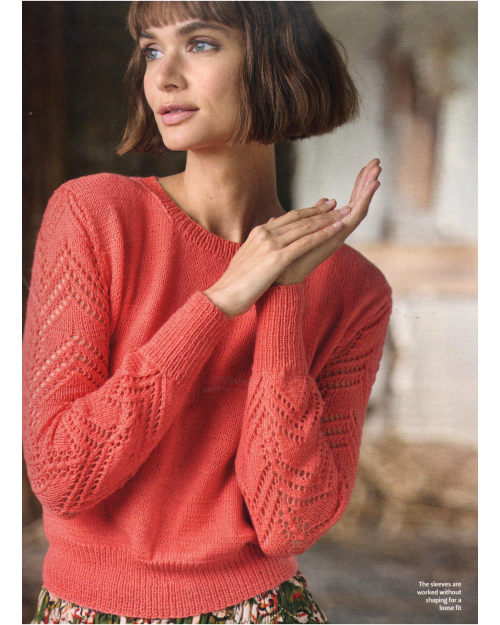 It is knitted in Cascade Yarns Heritage 4-ply which is one of my go-to fine sweater yarns and the pattern can be found in The Knitter issue 167 out now. The sample is in a very on trend Coral shade but the yarn comes in a wide range of colours so I am looking forward to seeing what people choose. 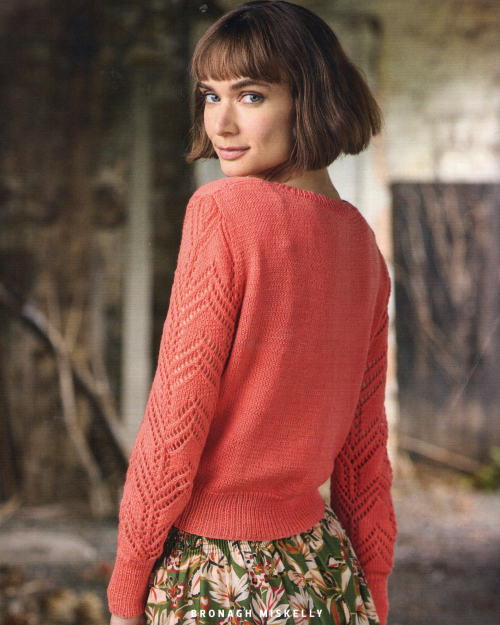 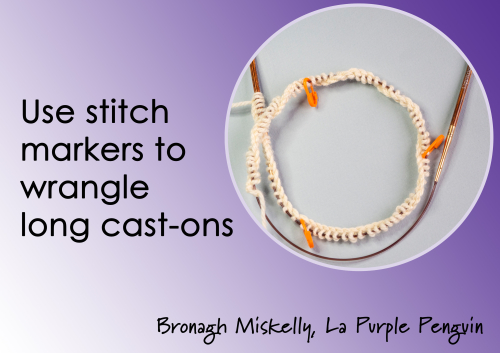 Do the words "cast on 150 stitches" fill you with horror?

Once I get over a certain number of stitches I can lose count as easily as blinking. But there is a simple solution.

As you cast on, pop a stitchmarker or a loop of contrast yarn every 20, 30 or 50 stitches (whatever suits you). Then you only need to count the stitches from the last marker each time. You can take out the markers as you knit your first row.

If you need any advice or any other help with building your knitting skills or confidence check out my knitting therapy service.

Wow what an exciting five years. It was my first every paid pattern for a magazine. Who knew what was going to happen next? I certainly didn't expect it to change my life but it has to some extent.

Now my tally is round about 100 patterns for magazines and growing every month. Plus other collaborations and patterns – and now I am in the midst of a book plan!

I never expected this and, to be honest, I sometimes have to be reminded I am a knitwear designer. 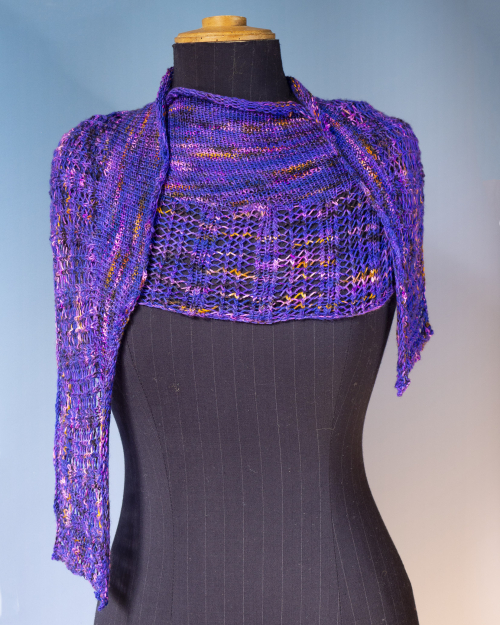 To celebrate I’ve knitted myself a new version of Purple Rain is a gorgeous skein of Olann Sock Lite and republished the pattern - I tucked the original sample away so carefully I can't find it now!. It is a long crescent shawlette where the lace section, featuring nuup raindrops, is knitted straight and then simple short rows in the stocking stitch section creates a curve.

You can find the pattern for half price until 24 August 2021 on Ravelry and in my pattern store plus there is 5% off all my patterns available on Ravelry and Payhip using the code PURPLEPARTY5 during the same period.

Tip of the Week: Find your Knitting Style 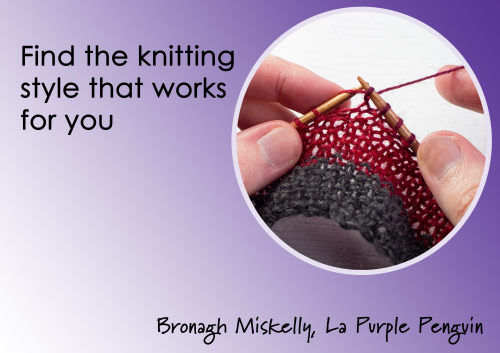 Just because your friend is a continental-style knitter it doesn't mean that it will be your preferred style or that you will hold your needles the same way.

Everyone's hands are different - individual like fingerprints - shaped by all the things you do in your life.

For example, I enjoy fencing (the sword type) and how I hold my sabre has had an influence on where the strength in my hands lies and that effects how I hold my needles and what is comfortable for me. I have also knitted every day for a very many years, which means I have had plenty of time to find a knitting style that suits me.

Don't worry if you hold your needles from above or below - choose the way that feels right to you. Think about whether you are comfortable making stitches and whether you like how your knitting comes out - consistent stitch size, good tension, etc. If you aren't happy it is time to adjust your style, otherwise keep going.

Posted at 10:52 AM in knitting, knitting techniques | Permalink | Comments (0)

Tip of the week: Knitting speed 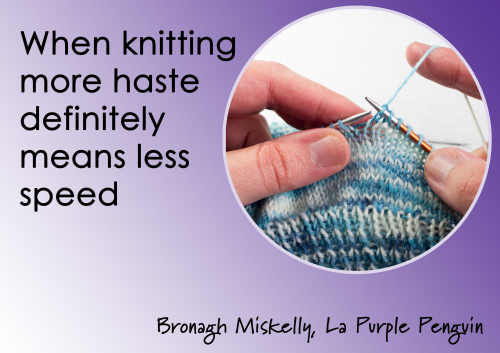 One question I'm asked a lot is: "How do I knit fast?"

My top tip for getting through your knitting faster is NOT to try to knit really fast. What generally happens is that you can end up dropping stitches, splitting yarn or making other mistakes that mean over all your knitting takes longer.

Rather than thinking about being speedy, concentrate on finding an efficient knitting style. This is a way of knitting that lets you to get into a steady rhythm and requires only small movements to make each stitch. This way each stitch will take a small amount time.

First,  work out what sort of needles you are most comfortable using. This could mean using long needles you can tuck under your arms. Or it could be working on circular needles (even for rows) because you. find it easier only to move the short tips.

There are various styles of knitting and it is worth trying out different methods to see what suits you - I'm going to contrate on two.

Many people say that “continental” style knitting (as in this UKHKA video), where you hold the yarn in your left hand and use the tip of the right needle to pull or “pick” it though each stitch is the fastest. This only requires a small movement so can be quite speedy.

However, if you are more comfortable holding the yarn in your right hand, learning to “flick” the yarn in the way forward.  Knitters use their index finger to move the yarn round the needle without ever letting go of the right hand needle. This allows them to work at a steady rhythm with very little excess movement. I like this tutorial from VeryPink

Experimenting with techniques and practice will help you find the most efficient and comfortable way to knit for you. Once you find it, you will develop your natural knitting speed. And remember this is about enjoyment not racing.

If you need any advice or any other help with building your knitting skills or confidence check out my knitting therapy service.

Posted at 10:36 AM in craft, knitting, knitting techniques | Permalink | Comments (0)