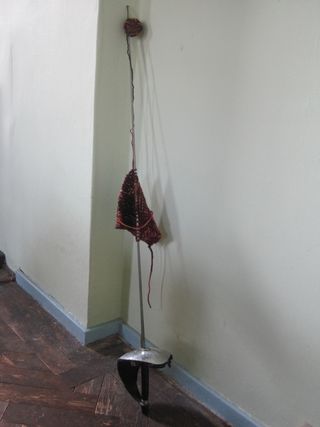 I’m a volunteer for London 2012 and will be part of the team delivering the fencing events at both the Olympics and Paralympics. I’m embracing all the opportunities to experience an Olympic Games first hand so when an opportunity came up recently to volunteer in another capacity thanks to my crafting skills I was there with my nimble fingers.

As a result in the past week I’ve spent one day sewing top secret costumes for the opening ceremony and another learning about wheelchair fencing equipment with some of the British wheelchair fencing squad who we hope to see at the games.

At the same time I’ve been planning my “Games time” knitting. Small projects that will fit in my gamesmaker bag that I can work on while travelling to and from shifts and on my breaks. My plan is to take part in the giant worldwide knit/crochet/spin-a-long that is the Ravelympics. This event founded on the yarncraft online community Ravelry encourages knitters, etc, to take part in challenges while viewing the Olympic Games. It features events such as the “single skein sprint” and the “socks putt” and to set themselves goals to achieve in the Olympic period – ie when the flame is burning in the stadium.

The event which ran during Beijing and Vancouver games has the double effect of raising awareness of the Games and challenging crafters to new skill levels. It creates a positive worldwide viewing party for the Games where crafters share their progress and discuss what they’ve been watching.

It would not be unexpected to come across, for example, the comment: “The rowing was so exciting I dropped all my stitches during the coxless fours finals”.

It is all about creating virtual participation.

So as a supporter of the Games and of Ravelry – I’m even the founder of a discussion group for ravellers who are also gamesmakers – I found the tone of a letter from the US Olympic Committee to Ravelry suggesting the event breaches Olympic trademarks insulting.

While all Olympic committees need to ensure that commercial organisations are not unfairly trading on the back of the Games and that sponsors interests are maintained (the sports need the funding), going after a non-commercial effort that celebrates the Olympics seems counter-productive.

But if the USOC legal department thought it had to pursue the matter, there was, as my mother would have said, no need to be rude about it.

The offending part of the letter is as follows:

“We believe using the name ‘Ravelympics’ for a competition that involves an afghan marathon, scarf hockey and sweater triathlon, among others, tends to denigrate the true nature of the Olympic Games. In a sense, it is disrespectful to our country’s finest athletes and fails to recognize or appreciate their hard work.”

Well quite frankly, the USOC is managing to be disrespectful to millions of of people who have great respect for sportspeople and others who have worked hard to perfect a skill

I have been privileged to witness the hard work of athletes close-up and the fact on one occasion that I knitted in the same room as they were preparing didn’t seem to bother them. The fact that I am highly skilled at an activity is likely to raise my appreciation of their skills not insult them.

As I write, the USOC Facebook page is swamped with comments from crafters and #Ravelympics is trending on Twitter. The 2m or so Ravelry members are clearly passionate individuals with a good grasp of social media.

Surely these are the people we want on the side of the Olympics, enthusiastically sharing news of the events their watching and sharing experiences and encouraging other people to watch the Games (and therefore see all the sponsor logos) – not angry and alienated.

A few hours after my post joined many others on this issue and contributed to the online storm, the USOC issued a statement intended to pour oil on troubled waters.

"The letter sent to the organizers of the Ravelympics was a standard-form cease and desist letter that explained why we need to protect our trademarks in legal terms. Rest assured, as an organization that has many passionate knitters, we never intended to make this a personal attack on the knitting community or to suggest that knitters are not supportive of Team USA.

We apologize for any insult and appreciate your support. We embrace hand-crafted American goods as we currently have the Annin Flagmakers of New Jersey stitching a custom-made American flag to accompany our team to the Olympic Games in London. To show our support of the Ravelry community, we would welcome any handmade items that you would like to create to travel with, and motivate, our team at the 2012 Games."

Well, it is an attempt at an apology. But it rather misses the point the sentences that caused the offence are not part of a standard-form letter, they are specific to Ravelry and imply that knitters are disrespectful of Olympic athletes.

On the other hand it is a public statement intended as an apology and that is quite an achievement for the fibre community.

What we don't know is where this leaves the Ravelympics themselves.

Stitched Selves at the Science Museum 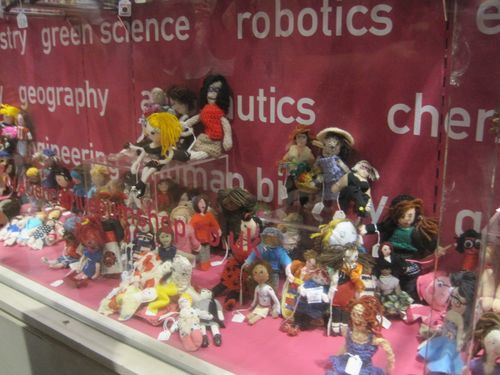 An army of 15cm knitted and stitched figures took the Science Museum by storm this evening as part of the latest Sciemce museum late event.

Organised by Stitch London the "stitched selves" were self portraits of their makers and with more than 250 on show it made an interesting exhibit in terms of the detail on show, the techniques and what peoplethought was significant about themselves.

Here are a few photos to give a flavour of the event.

Personally I think I'm one of the most threatening looking of the group - it's the way I grip the sword as if I'm about to break out over the slashed remains of my fellows. 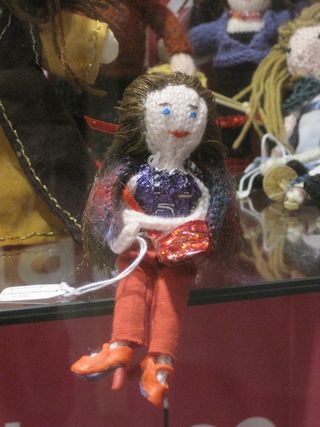 Meanwhile Elaine sits glamourously by as if waiting for cocktails with Caroline who was sadly at the other end of the display.

Some selves were real glam-pusses,
some used interesting
techniques. 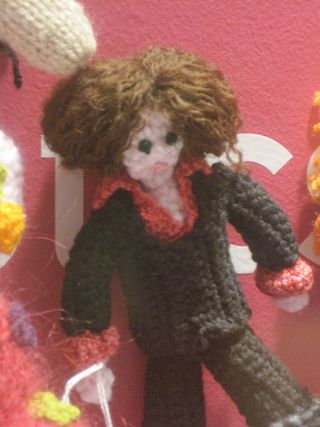 And one was even dressed in her Science Museum uniform And just a few more 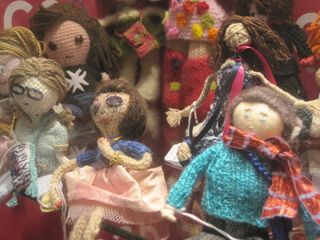 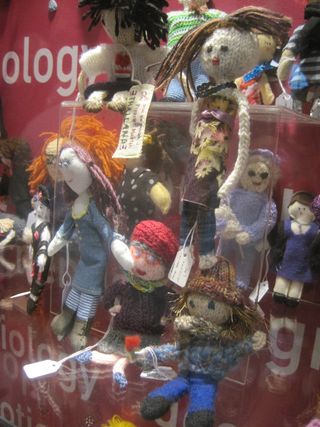 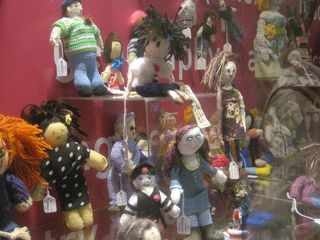 Knit yourself for the Science Museum

The Science Museum has asked London knitters through Stitch London to craft 6inch tall models of themselves for an exhibit in June.

The stages of mine are likely to feature here and on Ravelry. It will feature either a turquoise or a pink tunic dress, Rowan Tapestry hair & black leggings but could do with a suggestion for the shoes. I'm also wondering about making a fencing mask or sabre for it to carry...hmmmm

Welcome: Knitting and fencing but rarely together 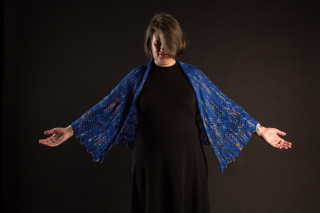 I love my pointy sticks and when I occasionally put down my knitting, I am sometimes known to pick up a sword - or at the very least help others indulge in some sabre fencing by helping my club organise competitions and events.

Although superficially different knitting and sabre fencing share some surprising common traits (apart from getting you odd looks on the train) - storage requirements, specialist kit, strange languages and of course the pointy objects.

The blog is mainly about adventures in yarn and jewellery but will occasionally feature a spot of swashbuckling.

One thing I should explain is the name. You can find me on Facebook, Twitter and Ravelry as lapurplepenguin and on Instagram it is bromiskelly_lapurplepenguin so this blog belongs to a penguin with pointy sticks (knitting needles and swords). There's lots of knitting on all these feeds so do please follow me.

Purple Penguin has been an all purpose name I've used for years - long before I started a second career as a knitwear designer. It first started I think when I needed a name for a quiz team or the like. Someone said think of a couple of things you like: obviously purple and penguins.

But it then came in handy as a code in relation to knitting and dressmaking. If you are wearing a garment you made and someone compliments it, and you admit you made it, there are sometimes odd reactions. But if I say "it's a purple penguin" they nod or say really. And so my knitting superhero identity was born.

You can find more about my work and designs at lapurplepenguin.com 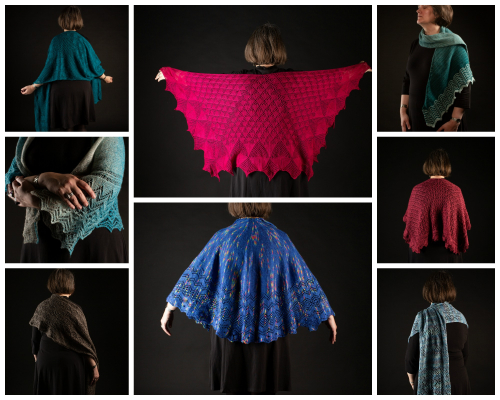