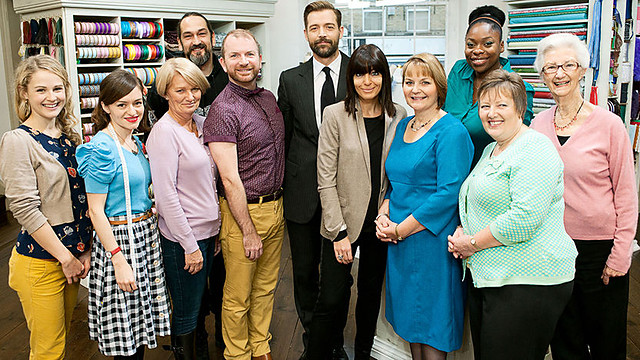 It was with some trepidation that I tuned into the BBC's Great British Sewing Bee. To be honest, although other TV forays into craft have raised the profile of the handmade, there has tended to be a tweeness factor.

So there I was ready to produce a pragmatic, critical review and then it happened.

I fell in love.

No, not with Saville Row tailor Patrick Grant - that's the debonair chap in the centre - but with the sewing studio and the people in it.

I wanted to be running between shelves of fabric and trimmings like a kid in a Lego factory alongside Sandra and having a calming herbal tea with over-ambitious Tilly.

I identified with these people to a ridiculous extent. They talked about wanting to put their personal stamp on things. As Jane said "nobody else will be wearing what I am" and "I love it when people ask 'where did you get that?' and I can say 'I made it".

I shared Lauren's memories of having a sewing kit at a young age and others' of sewing with mothers and grandmothers. I wanted to go to the cafe and have a chat with these eight contestants.

I also identified with the pressure and the tension of the tasks. I think I make the same face as Lauren when trying to perfect on invisible zip. And anyone who has sat up late sewing on buttons or hemming a garment that needs to be worn the next day, will know exactly that sweaty finger feeling the contestants developed when told they had only 10 minutes there.

I enjoy shows like Great British Bake Off and Masterchef, but I've never had the same emotional engagement as I found with this. With this every challenge, problem and triumph had resonance with me and I was still picking up tips.

All of which makes it impossible to review this show pragmatically but I will pull out a few interesting points.

Technical detail - I'll need to ask a sewing novice if it worked, but I was impressed with the technical information that came out about using patterns, fabric choice and fitting. There was a good deal of basic advice but also useful tips for the more experienced, such as Patrick demonstrating how a poor fit on the shoulder made the hem of a dress slope.

A project for viewers - I loved the idea of a simple laundry bag project to try at home. Oh, and why don't I own a bias binding maker?

I'm clearly too besotted to judge whether GBSB will bee a smash hit. But I do believe there is an opportunity to inspire people to dust off granny's sewing machine and convince them that sewing isn't necessarily about chintz.